The Komondor is a large to giant-sized dog from Hungary. They usually stand at a height of 27.5 inches with their large bodies covered with white, corded cords. They are unique-looking dogs who can certainly make anybody’s head turn.

From their coats itself, you can already tell that these dogs are not for beginners. But other than that, they come with more responsibilities, such as giving them enough exercise and attention. It’s also essential to show confident leadership when around these smart dogs.

However, even if they can be too much to handle, they can be the best family dog companion you can have for the right owner. They enjoy most of their time when spent with you, and they’ll surely be your great friend and guardian.

Komondors are ancient dogs that originated from Hungary around the 16th century. They are believed to have descended from the Aftscharka, a Russian dog breed brought by the Huns to Hungary.

For centuries, these dogs have served as guardians for livestock in his native country. Their coats are considered a great advantage as predators won’t see them as they closely resemble a sheep.

During the 1930s, the dogs were first imported to the US and were immediately recognized by the American Kennel Club in 1937. When World War II broke, most of these dogs were used by the military, which somehow affected their number.

Fortunately, fanciers of the breed didn’t give up to return the breed to its original numbers, and by the 1960s, they became an established breed in the US.

Today, the dogs rank 173rd as the most popular dog breed in the US. They are still considered rare, with only the largest numbers found in Hungary and the US.

Worldwide, there’s an estimate of only 10,000 Komondor, and somehow, only their owners can appreciate these dogs’ beauty.

Komondors are loyal, dignified, and brave dogs as they mature. However, they are undeniably energetic and playful dogs as puppies.

These dogs are generally calm and quiet indoors. But despite this, their large size makes them not suitable for living in an apartment. They need a spacious home with a large, securely fenced yard so they can run around.

City living may not also be ideal as these dogs have a loud bark. This might only irritate neighbors, especially at night, when the whole area is quiet.

Komondors are devoted and affectionate dogs to their families. They love spending time with their owners, but considering their size, they won’t be great playmates for small children. Toddlers would need supervision, and so would smaller pets.

They are also known to be distrustful with strangers. Expect them to stay alert when someone new comes to your home. And there will be cases you would need to supervise them well, so they are in their best behavior.

These dogs can also be aggressive with strange dogs and have tendencies of chasing smaller animals. This is why it’s essential to socialize them at an early age.

Try to get you Komondor accustomed to anything new – new people, new animals, and new situations. This way, they’ll know how to manage their feelings better. It’s also essential to establish some sort of authority on them. These dogs sometimes trust only themselves, so they might end up not following you if you are not firm enough. 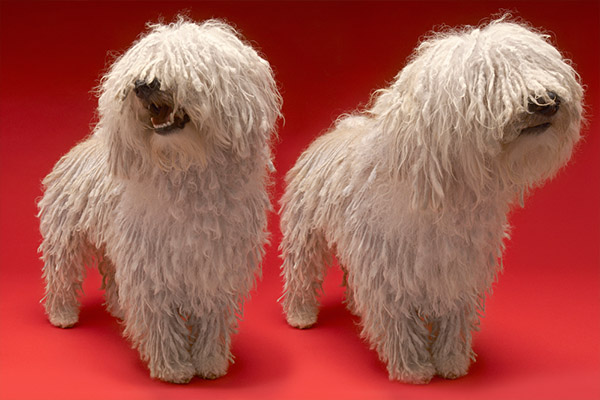