Standard Schnauzers are medium-sized dogs that, as their name implies, the “standard” Schnauzer. They are larger than the Miniature Schnauzer and smaller than the Giant Schnauzer. And like both Schnauzer breeds, these dogs feature a wiry coat that comes in the colors of black or pepper and salt.

These dogs are known to be energetic and alert. Like the other Schnauzer breeds, they are also quick in movements and athletic. With the right owners, these dogs make excellent family companions, especially if they have smaller kids. 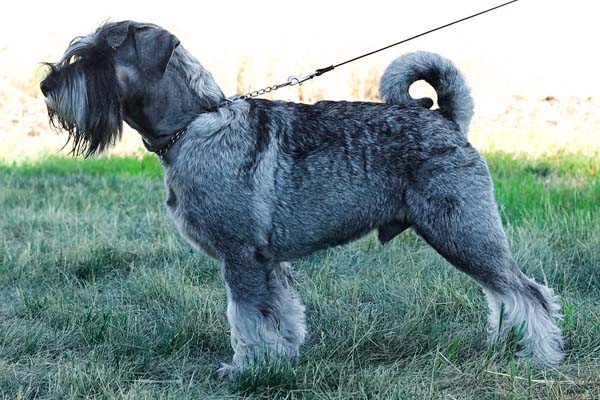 Standard Schnauzers came from Germany, where they were called Mittelschnauzer. They’re the first among Schnauzers’ breeds – the original which started the Giants and the Miniatures. These dogs are believed to have existed for centuries, as depicted in several paintings by Renaissance artists.

It is said that the Standards Schnauzers were developed by crossing a gray wolf spitz and a black German poodle. This resulted in a versatile dog that can guard farms and livestock, herd cattle, and get rid of pests. At the same time, these dogs are known to be great family companions.

By the mid-1800s, breeders started to standardize the breed. They were originally called Wirehaired Pinschers and were first exhibited in a dog show in Germany in 1879.

By 1900, the name Schnauzer became more familiar to people. Seven years later, in 1907, the Bavarian Schnauzer Klub in Munich, Germany, was founded. It was also around these times when the Schnauzers were imported to the US.

However, it was only in 1925 when the Schnauzer Club of America was formed. By 1933, the Standard Schnauzers were registered as separate by the American Kennel Club. Now, the breed ranks 89th as the most popular dog breed in the US.

The American Kennel Club generally describes standard Schnauzers as fearless, smart, and spirited. These dogs are dignified with impressive intelligence. Even their facial expressions already portray an alert, bold, and serious dog.

These dogs have high energies. Regardless if it’s indoors or outdoors, these dogs are quick and athletic. They love to play games with their humans, so they’re an excellent fit for those who can give them a lot of time.

As excellent family companions, the Standards Schnauzer is an affectionate and loyal dog. They make great playmates for your children and your other pets.

If there’s one thing you should note, don’t place this dog in a kennel or leave them in the backyard. They love being with their family, and as long as you have given him enough exercise, he won’t be much of a problem.

Standards Schnauzers are also known to be territorial dogs. You can expect them to bark to alert you when someone suspicious comes, however, they would never charge at people unless threatened.

They are just usually aloof to strangers. With early socialization, he’ll be more confident. This will also make him more well-rounded and accustomed to new things.

Training may come as a challenge because of their demanding and stubborn personalities. All you need is to establish firm and consistent leadership. If you can do that, he’ll be happy to oblige.