Dog Cone vs Dog Surgical Onesie: Which Is Best?

In this article, we are going to explore the classic dog cone vs dog surgical onesie to explore which is the best way to prevent your dog from licking their wounds after surgery.

Dogs lick their wounds every single time they have a chance to do so. It is something that comes naturally to all pets. You probably have read a few things about the benefits of licking their wounds, as it leads to quicker healing, but those aren’t true.

Let me tell you at the onset that dogs should be prevented from getting in contact with their wounds after surgery. If you allow your dog to lick its wound, it could remove the stitches, re-open the wound, or cause an infection.

The traditional way of stopping a dog from licking the wounds is to force it to wear a dog cone. Teasingly called by some the “cone of shame,” this option is proven to be useful as it completely rids the dog of access to all parts of its body, including the area of the wound.

The official name of the dog cone is “Elizabethan collar,” referencing the high collars worn by people during the Elizabethan era. While there’s no arguing the effectiveness of the “cone of shame,” most dogs feel uncomfortable with it since it is hard, stiff, and grossly uncomfortable. It is why, for the past several years; pet owners have come up with a bevy of alternatives that specifically address the disadvantages of a dog cone. One notable dog cone alternative is the onesie (click this link to view the best dog onesies).

We’ll discuss the arguments for a dog cone and a dog medical onesie and figure out which product is the best option for dogs after surgery.

Pros and Cons of Using a Dog Cone

Although licking is an instinctive response, it doesn’t mean you ignore it. The dog cone is the conventional choice for most veterinarians because of these reasons:

Regardless of how effective a dog cone is in preventing your dog from licking its surgery wounds, most pet owners eventually realize that the disadvantages of the “cone of shame” outweigh the advantages. Fortunately, there are a handful of better substitutes out there.

A wound on your dog’s body after surgery is prone to irritation and infection if your four-legged friend licks it. Since your dog (and you) aren’t comfortable with a cone, you’re forced to find an alternative. Well, the best replacement for the “cone of shame” is a dog onesie to stop licking.

The onesie for dogs offers far better comfort compared to a cone. It is usually made from breathable fabric and features an adjustable fit. Its most significant sales pitch is that it allows the dog to move freely and won’t restrict any of its senses, including sight and hearing.

How do you keep a dog from licking a wound without a cone?

Most dogs can’t tolerate a medical cone or Elizabethan collar, which is why some owners choose not to use one. So, how do you prevent yours from licking its wound without using a cone? Thus, the question of dog cone vs dog surgical onesie. There are quite a handful of options.

Go to your vet and inquire about a water-based product that can be sprayed on the wound. This product has a bitter taste that effectively repels the dog from licking the wound. But the glaring issue with this option is that the dog might resort to scratching the wound instead.

Another option is to use a t-shirt instead of an e collar. This option makes sense if the wound is in the abdominal and chest areas. Nonetheless, you must continuously monitor your buddy because it might resort to biting or chewing the shirt once it feels annoyed or uncomfortable with it.

One reason why your dog can’t help itself but lick on the wound is because of the itch. See your vet and ask for a prescription or remedy to relieve itching. There are a few products to choose from, i.e., a medicated shampoo, steroid-based medication for severe cases, and a cortisone-based spray.

Nevertheless, my money is still on the surgical recovery suit for dogs or medical onesie. It doesn’t have most of the disadvantages of a cone, and you don’t need to use any drug or medicine that could have side effects.

What can a dog wear instead of a cone?

While exploring the dog cone vs dog surgical onesie question, you’ll find other options as well. Like I said before, the “cone of shame” isn’t the only option available. The following are the most popular alternative that you can buy at any pet store:

Can I put a shirt on my dog instead of a cone?

So a DIY solution to the dog cone vs dog surgical onesie issue is a good old fashion tee shirt!

Letting your dog wear an old T-shirt to cover and protect its wound makes sense if you have other dogs at home. A traditional dog cone is useless when other dogs try to lick the wound.

Find a large enough old shirt that sufficiently covers the entire body up to the incision or wound. You’re better off using a cotton shirt so that the dog will be comfortable in it and the wound can breathe.

Can a dog sleep with a cone on?

As much as we hate the look and feel of a medical dog cone, “cone of shame,” Elizabethan collar – whatever you want to call it; there’s no denying the fact that it serves its purpose of preventing the dog from licking its wound. Contrary to what some pet owners say, your dog can sleep with a cone on.

I recommend that you never consider removing the cone simply because you think Fido isn’t comfortable sleeping with it. The best approach to quick healing is to leave the cone on all the time for the prescribed number of days by the veterinarian. However, when looking at a dog cone vs dog surgical onesie, the onesie is much more comfortable for your dog to sleep in.

My Final Thoughts On Dog Cones vs. Surgical Onesies

I’m not against the use of a dog cone to keep my pet from licking its wound. There’s no question that it works. But when you get home after the surgery and see your dog distraught and uncomfortable because of the experience, it’s part of your instinct as a responsible master to do something to cheer it up. Letting the animal wear a cone will most likely make the situation worse than it already is. This is the main reason why I choose a dog surgery onesie over a cone in my quest to answer the question: Dog Cone vs Dog Surgical Onesie. 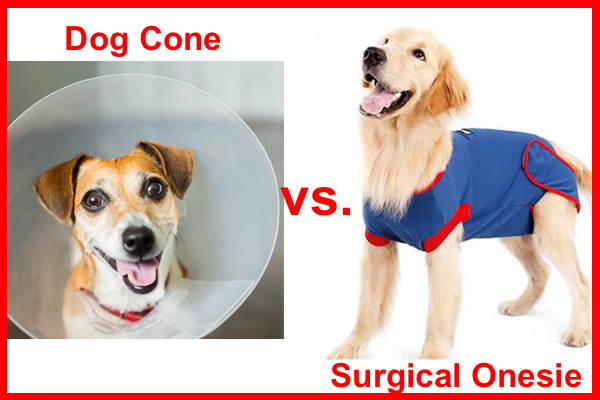