French Bulldogs are well-known for their unique appearance and distinctive bat-ears. The French Bulldog may not be as aesthetically beautiful as other breeds, but their attributes make them great companion dogs.

Despite looking glum, they are entertaining and loves human contact. They love playing, plus they’re easy to train as long as you make it seem like a game. They are very charming and humorous dogs that will surely brighten your day. They can quickly adapt to life, whether it be with singles, couples, or a big family.

History Of The French Bulldog

French Bulldogs originated in England in the mid-1800s. They were created as miniature versions of the Bulldog and was popular among lace workers in Nottingham.

During the height of the Industrial Revolution, toy-sized Bulldogs served as mascots for Nottingham lacemakers. It was also during this time that the lace-making industry was threatened. So, the lacemakers relocated to France, where the little dogs became popular immediately.

For years, the toy Bulldogs were crossbred with Terriers and Pugs, which eventually developed their famous bat-ears. This was the start that they were called French Bulldogs.

Eventually, Paris discovered the breed and became one of the most sought out dog breeds to serve as companions for French men and women. The breed became associated with the cafe life, dancehalls, and even got included in paintings.

Their popularity spread throughout Europe and America by the end of the 19th century. And their most distinctive feature is the bat ears.

French Bulldogs are generally adaptable, playful, and smart, which makes them a great member of the family. They were bred to become companion dogs, and I can say that they are doing their job pretty well.

They are a very intelligent breed. They have great intuition, and since you’ll be surprised at how freely they can think. They are easy to train but can be very stubborn breed if not treated with care.

As a puppy, they can be overly energetic and might get into a lot of trouble. They’re just too enthusiastic, but most of the time, it’s something that can be easily handled. They also love playing rough, so it’s best to give them toys to chew on.

As they grow older, they will lose some of their energy, but they’ll remain active socially. They are very friendly to the point that they would jump to anybody’s lap when they find the opportunity. They enjoy being loved, and they are also friendly to other dogs.

Even as adults, they can remain playful and will steal everyone’s attention (and hearts). They have the best personality of any small dog, as long as it’s partnered with proper upbringing. Otherwise, they can be aggressive and will bark a lot.

Another thing that you would have to take note of is that French Bulldogs are not the best pets for those who are always away from home. They crave attention and can become anxious or depressed if left at home for too long. Also, they can be destructive without proper guidance.

French Bulldogs need a high-quality and balanced diet to remain healthy and reduce the risk of any health issues such as obesity. There are two major things that they require: protein and fat.

Protein is necessary to build their muscles, and this must be taken from high-quality food sources such as poultry, meat, and fish. Fat is essential to provide French Bulldogs energy through calories and omega fatty acids. This should be taken from animal sources as well.

Since French Bulldogs have a fast metabolism, there’s a need to feed them between 25 and 35 calories per pound of body weight to maintain a healthy body.

French Bulldogs have short coats that shed minimally. But, it doesn’t mean that they don’t need brushing.

Brushing is still ideal if you want to maintain a healthy coat. It’s best to do it at least once a week. Also, since the coat is short, brushing won’t take much of your time. But, it’s also highly advised to stay longer if needed as French Bulldogs certainly love the attention. It’s an excellent way to bond.

French Bulldogs, just like any short-haired breeds, might only need a bath at least three times in a year. However, since they are highly susceptible to skin allergies, then a once in a month bath time would be highly appreciated.

Trimming nails is essential, too, as long nails can cause him pain. They should be checked regularly, and if it’s hard for you to trim his nails on your own, then take him to the pet groomer so they’ll be expertly taken care of.

French Bulldogs are a very highly active breed. They would appreciate an hour of exercise every day. Short walks will also suffice, especially if the weather is hot. They are prone to having difficulty in breathing and should not be over-exercised.

French Bulldogs cannot swim, so don’t ever leave them near unattended pools, tubs, and any other bodies of water.

In hot seasons, they may find it hard to breathe because of their flat-faced structure. They are also very sensitive in anesthesia.

They are also prone to eye diseases such as cherry-eye, juvenile cataracts, and entropion. Skin allergies are prevalent, too, which is why they need a regular bath.

If you own a French Bulldog, you should also watch out for bacterial and viral infections, obesity, and parasites. They can also have genetic problems such as back problems, spinal deformities, knee problems, hip and elbow dysplasia, and more.

It’s also important to note that they can have separation anxiety, so it’s not best to leave him alone for too long.

French Bulldogs can live for 10-12 years.

Check Out Other Companion Dog Breeds: 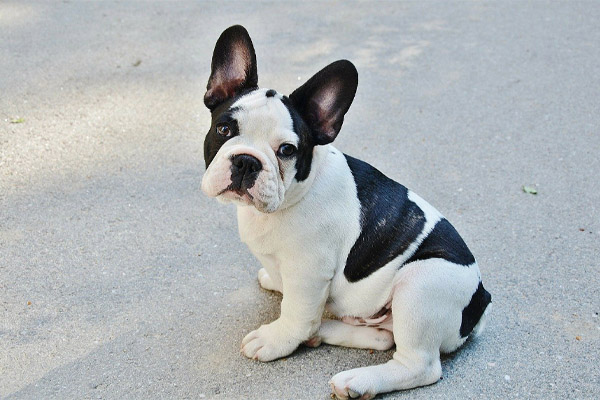