Affenpinschers, or “monkey dogs,” are small-sized dogs known for their unusual facial appearance. The Affenpinscher stands at a height of 11.5 inches, and its small body is covered with a shaggy coat that comes in black, gray, silver, black-and-tan, or red-brown colors.

The French often call them “mustache little devils” because of their terrier-like attitude. Training may come as a challenge, and even professional handlers say that it’s better to befriend the Affen.

In other words, they are not dogs for everyone, and you would need to find time to take care of them. They are perfect for those looking for affectionate, loving dogs, who will always make you laugh. Affenpinschers originated from Germany way back in the 17th century. However, the first records of the breed only started in the late 19th century.

These dogs were bred like terriers, although they are not one. They were ratters, developed to exterminate pests from German stables in the 1600s. Soon, the dogs were also brought indoors to work as ratters in the kitchens of Germany and Central Europe.

As years passed, Affenpinschers became dual-purpose dogs – ratters by day and devoted companions for the landladies at night. And since they were more popular with the ladies, the breed was slowly reduced in size to become better companion dogs.

Given the dog’s temperament, skills, and unique appearance, breeders took an interest in the Affens and made them play roles in developing other small dog breeds. Many believed that they are one of the breeds used to create the Brussels Griffon and the Miniature Schnauzer.

Around the 1800s, many more people from France and Germany showed up. The Berlin Lapdog Club formulated a breed standard in 1902 but was only finalized by 1913.

In 1936, the American Kennel Club finally recognized the dog breed. The dogs immediately rose to popularity, and from being hidden in kitchens and stables, they were finally shown in show rings.

When the second world war came, breeding of the dogs in the US was halted. The interest in the breed was back in the 1950s, but today, the dogs are still considered rare. They currently rank 148th as the most popular dog breed in the US, and who knows if his ranking will still go up.

The French describe the Affenpinschers as “diablotin moustachu” or mustached little devils for a reason. These are confident and fearless dogs, and most people will agree that they are spunkier than most toy dog breeds.

They are always on alert. If he notices a strange person or pet coming to your territory, he will immediately try to intimidate them. This may look charming, considering their size. However, it’s vital to socialize them at an early age, so they won’t remain suspicious of a person even when indoors.

Affenpinschers love their family. They are often described as affectionate, devoted, and protective dogs.

They are also usually fine with other pets that grew up with them. The only problem is that they are not very pleased with rough handling, so keep toddlers away. In fact, they are happiest in children-free homes.

These dogs are proud and sensitive, so you must be very careful about how you act towards them. Training might also become difficult, so remember to have lots of patience.

Be gentle with them and use positive reinforcements instead of a rough hand. And you must also be careful of spoiling them too much. 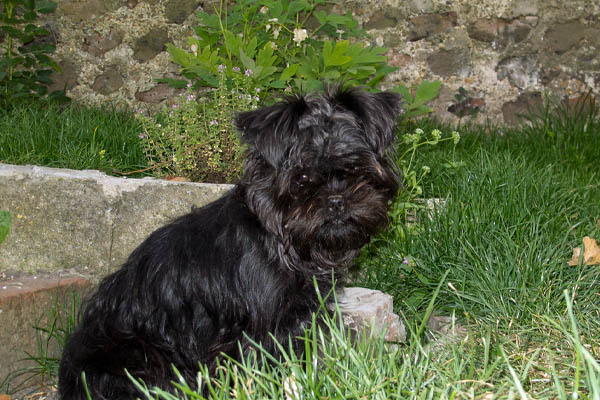