The Bichon Frise is a small-sized dog breed known for his white and puffy coat. Bichons Frises have doll-like faces with dark eyes that everyone adores. Some people even mistake them as white poodles because of the resemblance.

Despite their small size, they are sturdy dogs. They also make excellent family pets even if you haven’t owned a dog before. They are playful and can get along well with children. Not to mention that they are also adaptable in any environment – whether it’s a spacious house or a small apartment. 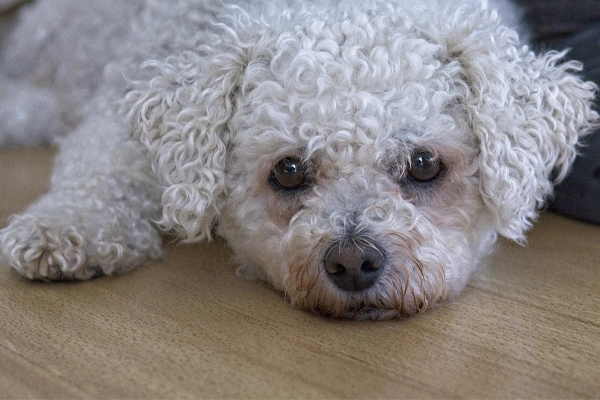 Bichon Frise’s origin is not clear.

Many believed that they were members of Barbichon dogs, a clan of white dogs. This breed then started producing more on Tenerife Island with the Bichon Tenerife, ancestor of the Bichon Frise, as the most popular among island’s sailors.

The very first records about the Bichon Frise began only in the 14th century. This was when French sailors brought the Bichon Tenerife to Europe.

The dogs immediately became a favorite dog breed, especially with the noblemen. Their popularity reached the royal courts of Spain, Italy, and France. Kings like King Francis I, King Henry, and even Napoleon III were so fond of the dogs.

Unfortunately, in the late 1800s, the Bichon Frise slowly decreased in popularity with the coming of the French Revolution. Their noble owners went to prison, died, and executed, leaving the dogs with almost no home. They were removed from their privileged lives.

As many of them were on the streets, circus actors have taken in most of the dogs. And during these times, people have considered it an ordinary dog. If not for the breed’s appeal, they would have gone extinct during these times.

When World War I was over, French breeders gained interest in the breed again. They started working on preserving the breed, and by 1933, the Societe Centrale Canine of France adopted the official breed standard.

By 1956, the Bichon Frise was brought to the US, but it wasn’t until 1972 when the American Kennel Club registered the breed. The Bichon Frise is generally playful, curious, and vigorous. In other words, they are surrounded by this bubble of cheerfulness that surely anyone adores.

They are very easy to live with, even if you’re a first-time dog owner. All you need to remember is that these dogs love playing games, snuggling into laps and pillows, cuddles, and looking out the window.

The only problem is that he can’t be left alone for long periods. So if you’re out often, then the Bichon Frise might not be a great choice as he gets separation anxiety. His destructive behavior might also show up because of this.

They love people, and they can be very friendly, even with strangers and other animals. If you have kids, you also don’t need to worry about it too much because they’re also good with kids. But of course, you still need to supervise.

As highly intelligent dogs, they are easy to train. He responds better when there’s food, so treats are something you can offer as a reward. Remember to be patient in handling him and never approach with harshness.

Early socialization is crucial even for the nicest dogs. Make sure to socialize them early with strangers, other animals, and new sights and sounds. It’s also nice if you meet the parents, so you know what temperaments to expect.