Xoloitzcuintli, or Xolo in short, are small to medium dog breeds of Mexican origin. They come in three sizes – toy, miniature, and standard – and their coats come in two varieties – coated and hairless. These dogs also feature a compact head, upright bat ears, and a thoughtful, intelligent face.

Xolos may not be a lovely dog for everyone. However, they are great dog companions for first-time dog owners. Their coats are hypoallergenic, which is perfect for those with allergies. They are also not too hyperactive that will tire you out.

Protective, devoted, and loving, Xoloitzcuintli are excellent family companions who can truly brighten up your day. 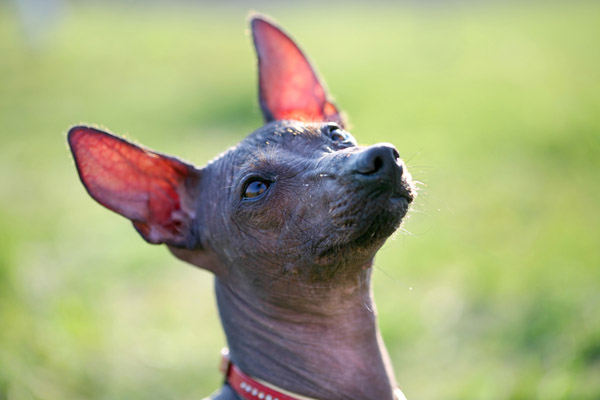 Xoloitzcuintles are ancient dogs that originated from Mexico as far as 3,000 years ago. They are often confused with the Chinese Crested, but these are very distinct dogs.

Unlike many other dog breeds, Xolos are believed to be natural breeds and not a result of any crossbreeding. Based on archaeological evidence, Xolo’s ancestors accompanied migratory people from Asia to the New World. They took their name from an Aztec deity named Xolotl, and “itzcuintli” which is an Aztec word for dog.

Ancient people believed that these dogs have healing powers. They are said to cure asthma, rheumatism, insomnia, and can even drive evil spirits away. They served as guides for the dead, and sadly, were often used as a sacrifice.

For centuries, Xoloitzcuintles thrived and were molded by natural selection. And in 1887, the breed was first recognized by the American Kennel Club. They were originally referred to as Mexican Hairless.

The dogs peaked into popularity, and they were portrayed in many artworks and were loved by many. However, this popularity soon died out that the American Kennel Club deregistered the dog breed in 1959.

The breed almost went extinct, but thanks to some fans, the breed was brought back and is now considered Mexico’s national treasure. In 2010, the dog was named the “dog of the year.” A year later, they were returned to the AKC studbook.

The dogs now rank 140th as the most popular dog breeds and are even considered one of the rarest. They make excellent companion dogs, and their cuddles are the warmest during hot weather.

Xoloitzcuintli dogs are loyal, alert, and calm dogs. They come in three different sizes, with the small ones being the most common of the three.

This breed is considered slightly active outdoors but calm and even-tempered indoors. They are very attentive to their owners, and they thrive for human companionship and attention. If left too long without any interaction, they tend to get bored and will act out of that boredom.

They are playful dogs, and most of the time, they only choose to spend their time with one person. If you happen to be that person, spend some time with them, whether by taking them out in long walks, playing together in a yard, or snuggling in your bed.

If you have kids, always keep close supervision. Like any other small dogs, Xolos may not be able to take rough handling. However, for well-behaved kids, they will make great playmates. They are also used to come in packs which make them friendly with dogs that grew up with them.

Xolos are known to be wary of strangers, which makes them excellent watchdogs. Their protective and territorial nature also makes them not friendly with strange dogs. They also have a high prey drive, which will let them chase smaller animals.

These dogs are usually timid in new situations, so it’s essential to socialize them at an early age. This will help in making them more well-rounded and accustomed to new situations that come to them.

Obedience training is also very essential. These dogs are smart, so training shouldn’t come as hard as long as you’re firm and consistent. They respond best if you’re gentle, while harsh discipline frightens them.