Bulldogs can never be mistaken for other breeds. Their features are very distinct from their loose skin on the head, furrowed brow, nose pushed-in, small ears, and undershot jaw. The Bulldog is a medium-sized breed that has broad shoulders and chest, with thick limbs. And although they are low to the ground, they have a wide and muscular build.

Cartoons often depict Bulldogs as ferocious. However, they are very affectionate and kind. They are indeed courageous, but they don’t pick up a fight. They love people, and they enjoy the attention. However, although friendly, they can also be stubborn and protective.

History Of The Bulldog

Bulldogs have a bloody history. Believe it or not, their ancestors have very much different traits than the Bulldogs we know today.

It was believed that Bulldogs were created in the 13th-century in England during the reign of King John. They were designed to take part in the sport bull baiting where a staked bull is sent to a stadium to fight a pack of dogs, and spectators can bet on the outcome. The dogs used, the Bulldog’s ancestors, were ferocious and had large jaws. They are so brave and seem to be not affected by pain.

In the year 1835, England finally banned these kinds of sports, which involved animals. However, this didn’t stop it, and the bloody arena just went underground.

From bull-baiting, came pit-dog fighting in cages. This activity required quicker dogs than what they used during bull baiting. So gamblers started to create their gladiators by cross-breeding different kinds of Terriers with Bulldogs, which created the other bull-type terrier breeds.

Bulldogs almost faced extinction because nobody wanted to use them because there was no bull baiting anymore. Fortunately, there were admirers of the breed that started the process to transform the ferocious animal to a companion type.

It was a long process. It involved refining features to make the dog attractive, tampering down the dog’s ferociousness, and recreating the breed to become sweet and fond of children. And in 1886, all the efforts were paid as the breed was finally recognized.

Bulldogs then became a national symbol in England, became the first animal mascot in sports, and also served as the face of Mack Truck company and the US Marine Corps.

Bulldogs are generally friendly and calm, and if there’s one trait that they got from their ancestors, it’s that they’re very courageous.

Despite his gloomy features, Bulldogs are one of the most amiable dog breeds. They are sweet, gentle, dependable, and predictable. If you have kids, then this dog is one of the best choices to have. This is because they are very fond of children, and will always have a patient and affectionate nature around them.

However, it’s still best to supervise children when around this breed to ensure that the child won’t push the dog’s patience too far. And it’s best to train a child to be gentle with the dog also, so it works both ways.

As they are very loving and affectionate to family, they can be very protective when strangers are around. They also slightly become hostile around other dogs. However, if raised with other animals, then they can be compatible too.

Bulldogs can also be lazy. Though they require activity to prevent them from getting overweight, they just love to lounge around the house. They make excellent cuddle buddies.

Bulldogs can be greedy when it comes to food. That’s why they need proper monitoring to make sure that they do not go beyond their weight limit. Always look for high-quality options that will fulfill his nutritional needs.

Bulldog needs a balanced diet packed with a mixture of protein, healthy fats, and carbohydrates. Also, don’t ever forget to put out a bowl of water to keep them hydrated as well. With the right balanced diet, bulldogs will always have enough energy and maintain that shiny coat.

Bulldogs shed regularly and might require two to three times of brushing in a week. Give them an all-over brushing using a soft brush for 10 minutes to maintain that beautiful coat.

The wrinkles on the Bulldog’s face also need to be checked regularly. You need to make sure that the skin under is clean, dry, and no food is trapped. This will prevent any form of skin irritation.

To clean the wrinkles, dip the cotton balls in peroxide. Then apply some cornstarch afterward for faster drying. Make sure that you don’t get near the eyes.

Clip their nails regularly too as it might give them pain if kept too long.

Bulldogs are a lazy type of breed who are content and happy to relax beside their owner. But that doesn’t mean that they don’t enjoy a few walks.

Walking a bulldog for 20 to 30 minutes a day will keep him in shape. This will help prevent obesity that may raise other health concerns. Also, walking during warm weather is not advisable as bulldogs can quickly run out of breath.

Other than walking, you can also play fetch. But, don’t throw the ball too far to avoid overexerting your Bulldog’s energy.

If there’s one crucial thing you should take note of about Bulldogs, is that they have difficulty in breathing. As dog parents of a bulldog, it is essential not to get them overheated.

They also have problems in regulating their temperature. So, it’s best to raise a Bulldog in an air-conditioned home. To prevent overheating, a cold-water bath, letting them drink water, and spreading their fur to increase airflow will help.

They are also susceptible to skin problems and allergies, such as eczema, bacterial infections, hot spots, and interdigital cysts. This is why it’s vital to bath them regularly and focus on the wrinkles that might hide the dirt.

They can also develop bone and joint diseases such as hip dysplasia, joint and ligament injuries, and arthritis. Mostly, this is because of genetics. Eye infections such as cherry eyes and dry eyes are also something you need to watch out.

Other health issues are thyroid diseases, heart diseases, and cancer. It’s best to get them checked regularly, and if there are symptoms of any infection or pain, they should be brought to the vet immediately. 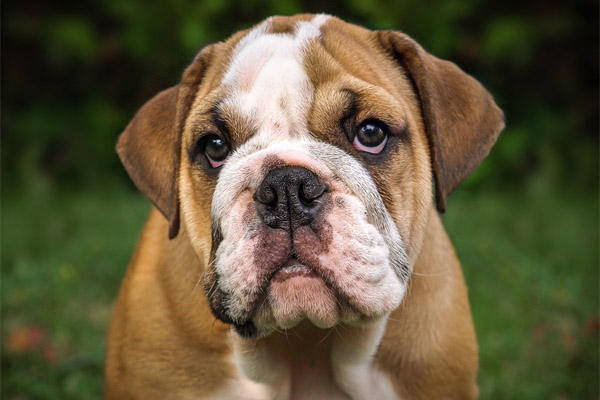