The Dandie Dinmont Terrier is a small-sized dog that looks a bit different from other terrier breeds. These dogs feature a long body and large head covered with medium-length coats, long, feathery ears, and bright, round eyes.

The coats usually come in colors that range from black to pale gray or red to fawn. And their distinctive feature is the silky white top-knot on their heads.

Dandie Dinmont Terriers are known to be affectionate and lively family companions. If brought up well, they’ll get along with your children and other pets. They’ll be great playmates, but of course, supervision is always essential. Dandie Dinmont Terriers originated from Scotland around the 1700s. If you find their name interesting, it’s because it came from a fictional character in a book written by Sir Walter Scott.

The breed has served farmers for years, mainly for hunting small game and tracking otters. They are even considered one of the oldest breeds of terriers, but they don’t have a name. That was until Scott mentioned them in his book.

Scott is a famous novelist in Scotland who happens to be a fan of the breed. In his 1815 novel called “Guy Mannering”, he included a character named Dandie Dinmont. Dandie Dinmont is a farmer who keeps a pack of terriers who closely resembles the breed.

Due to this exposure, the terriers were named Dandie Dinmont’s Terriers with the “s” dropped as years went by. By 1875, the Dandie Dinmont Terrier Club was formed in Scotland, followed by a written standard for the breed.

By the late 19th century, the Dandies became very popular in England with Queen Victoria owning one. Even the French King Louis Philippe kept several Dandies as part of his royal entourage.

When these dogs reached the US is unknown, but the American Kennel Club registered them by 1886. Sadly when the World War broke off, the breed almost went extinct, like many other dogs breeds.

But thanks to the efforts of several breeders, the dog was reestablished again by the early 1990s. Today, they rank 176th as the most popular dog breed in the US and is also considered one of the rarest.

The England Kennel Club even listed the breed as endangered, and if not taken care of well, they might come close to extinction. 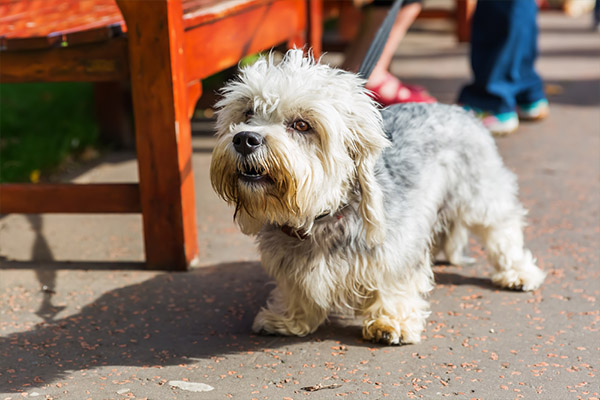 Though considered one of the brightest among the terrier breeds, Dandie Dinmont Terriers are independent, smart, and proud dogs. These are hunters, so if you exercise him outdoors, make sure you have a securely fenced yard or put him on a leash.

These dogs will not be great companions for running or biking. They prefer long walks on a leash, play sessions, and family activities where you can include him.

Dandie Dinmont Terriers are known to be affectionate to their families. Most of the time, they only bond with a single person. As they are naturally calm indoors, they’ll make excellent companions for children too.

They are mostly reserved with strangers. You’ll also appreciate the fact that these dogs are not barkers. They are determined watchdogs, though, and you can expect them to bark when necessary.

They are also usually friendly with other dogs and don’t try to act dominant. However, they also won’t back down if pushed.

Though calmer than most terrier breeds, Dandies need early socialization to become more well-rounded dogs. This will also help them become more accustomed to anything new, making it easier for them to manage their feelings.

These dogs are also known to have a mind of their own. They need consistent and firm leadership. Make sure to carry lots of patience, though, and it’s important not to be harsh on this dog as this will only make them more uncooperative.