Miniature Bull Terriers, as their name implies, are mini-sized bull terriers. The Miniature Bull Terrier has a compact body, muscular and covered by a smooth coat that comes in various colors, including white, black, or white with colored markings. What makes the breed stand out is the egghead and clown face.

Miniature Bull Terriers are known to have large personalities despite their size. They are also quite strong and playful, and may not be the best dogs for someone inexperienced. You need to be firm, patient, and always be one step ahead. And in exchange, the Mini Bull Terrier will surely show you love and affection. 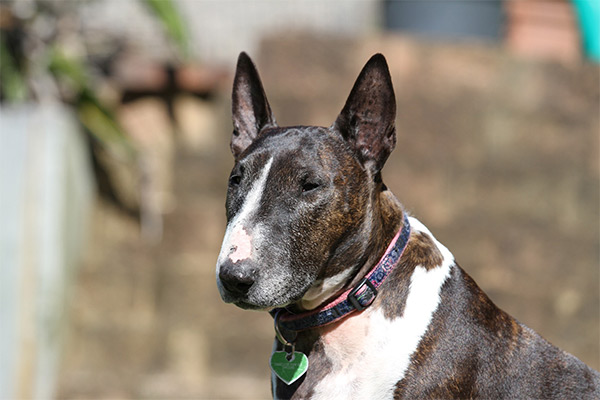 Bull Terriers were developed around the 1830s by crossing Bulldogs and English Terriers. The result is an excellent hunting dog and rat exterminators in dog sporting arenas. Further cross-breeding gave this dog a fancier look, making them elegant fashion statements.

Twenty years later, fanciers of the Bull Terrier breed desired to create a smaller version of this dog. These dogs were developed to serve as ratters in small tight quarters that the larger dog breed can’t reach.

Miniature Bull Terriers are almost similar to the Bull Terriers even with their small size. They have the same tenacity and prey drive, but at the same time, they are also playful and sweet.

These dogs were recognized as an official breed in the year 1939, England. It’s unknown how they reached the US, but it took several years before the American Kennel Club recognized them in 1991.

Now, the Miniature Bull Terriers are still uncommon to most, But to those who do know the breed, they can all agree that they are great family companions.

The American Kennel Club generally describes the Miniature Bull Terrier as upbeat, mischievous, and comical dogs. Most owners of the breed say that these dogs make their life brighter.

With the dog’s playful temperament, they are always in search of something interesting to do. It’s essential to keep them entertained, whether through stimulating activities, dog work, or training. A bored Miniature Bull Terrier can be destructive.

Miniature Bull Terriers are people-person dogs. They are happiest when surrounded by his family and given the time and attention they need. It would be best if you do not place them inside kennels, but rather let them be indoors to spend time with you.

They are not the best cuddle buddies. They would want to play outside, but make sure that you have a secured fence. They will make excellent playmates for older children and are also tolerant and gentle to toddlers.

If you have other pets, don’t be surprised to see him get along well with them. However, they do have tendencies to chase smaller animals like cats and squirrels.

Miniature Bull Terriers can be friendly or aloof to strangers. As alert dogs, you can expect them to be ready to jump in when you need them. It’s essential to socialize these dogs, so they don’t get too aggressive. Getting them accustomed to new people, animals, sights, and sounds will also make them more well-rounded.

Training may come a little challenging as they tend to be stubborn. It’s important to be firm and consistent, and never be harsh on them. If you find it challenging to train them, you can enroll them in a puppy school too.