Wirehaired Pointing Griffons are medium-sized gundogs that stand at the height of up to 24 inches. These dogs accompanied hunters and were used as pointers and retrievers during the hunts. As their name implies, the body of the Wirehaired Pointing Griffon is covered with a wiry, double coat that somehow gives it a rugged appearance. They also come with a mustache, bushy eyebrows, and gleaming eyes.

For those looking for a versatile family dog, the Wirehaired Pointing Griffon is a dog breed you can consider. These dogs get along well with everyone, but they may require daily exercise to keep them happy. 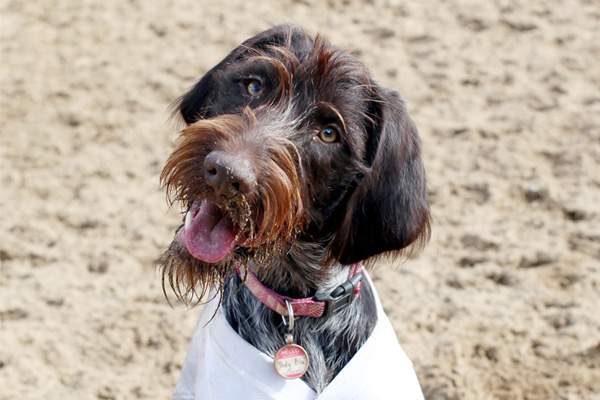 The Wirehaired Pointing Griffon is a reasonably young breed that was only developed in the 19th century by a man named E.K. Korthals.

During the 1800s, huntsmen in Europe wanted a dog breed with great versatility, and Korthals, a Dutchman, was one of them. He started his work in the year 1874, producing three dogs who served to be the best lines of the Wirehaired Pointing Griffon breed.

There were no records, however, of what dogs he used in the crossbreeding, but many believed that he crossed an Otterhound with several Setters and Spaniels. Others also mentioned including a Pointer into the mix.

But regardless of which dogs he used, Korthals succeeded. He was able to produce a dog with a keen sense of smell and can point and retrieve on land and water. These dogs were named “supreme gundogs,” and they were able to win many hunter’s hearts.

The Wirehaired Pointing Griffon was imported to the US by 1887. Quickly after that, in the same year, the first of their kind was registered by the American Kennel Club.

As highly energetic and athletic dogs, Wirehaired Pointing Griffons require daily exercise. They need attention and companionship. Being left alone inside the house for too long can bring out destructive behavior.

Wirehaired Pointing Griffons are friendly with everyone. But they are incredibly devoted and loyal to family. They also get along well with kids of any age.

With their great sense of humor, they can make you laugh, and this trait will remain even as they age.

Though these dogs are not aggressive, they can be aloof with strangers, especially if they were not socialized at an early age. They also get along well with other animals, but they can be notorious cat chasers.

Training them can be a challenge because of their independent trait. Plus, they are easily distracted. Food and treats are great ways to make him obey, so you might want to keep this trick up your sleeve.